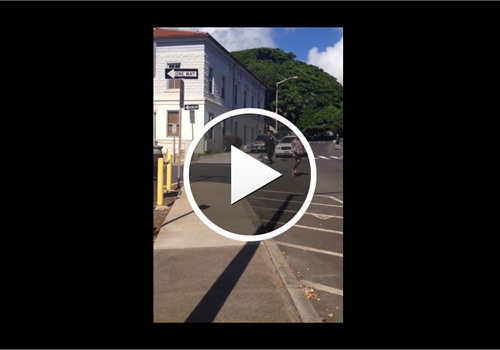 A smart-phone video posted on YouTube shows Maui, Hawaii, mayoral candidate Beau Hawkes resisting an officer's attempts to arrest him after he allegedly fled from a traffic stop for driving without a license plate.

It's not clear if the officer let the Makawao candidate continue on his way to a Maui County testimony meeting on GMOs or if Hawkes fled the traffic stop, but the officer followed him there and waited for him.

But the following moments in Hawke’s July 23rd encounter with the law is anything but mayoral.

As he fled, he screamed,"Come on, cop! You can’t do this, dude," just before the officer fired a stun gun into Hawke’s back, throwing his body straight into the ground.

Every groan, every scream is heard from clear across the block as officers cuff him.

Commenting on his post-TASER face-plant, Hawkes told the Daily News, "That was an incredibly abrupt and brutal landing and I thank God that happened out of frame."
Hawkes is being charged with resisting arrest and failing to obey an officer.
Read more about Hawaii Hawaii agencies TASER Vehicle Pursuits