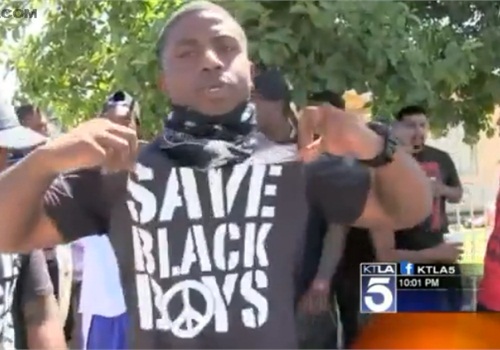 A music video response to the fatal police shooting of Ezell Ford in South Los Angeles prompted the LAPD's union to call for police officers to be on heightened alert Thursday, reports KTLA.

The video, titled "F*** tha Police," a name shared with the 1988 N.W.A. song, intersperses news video related to the Aug. 11 killing of 25-year-old Ford with footage of a more than a dozen people raising their hands and their middle fingers at the camera. Many wear T-shirts stating "Save Black Boys."

The video was posted Aug. 15 and, according to the YouTube caption, accompanies a song by "Ceebo The Rapper," who told KTLA he wanted to consult his lawyer before commenting on the video. The song describes police as "the enemy" and "KKK in the flesh."

In an alert emailed to members on Thursday, the Los Angeles Police Protective League board stated that the video was from a "street gang" and called for revenge for Ford's death.

"In light of the video and obvious threats against the police, ALL officers should be aware of this video and are advised to be on heightened alert and pay extra attention to your tactics and surroundings," the email stated.