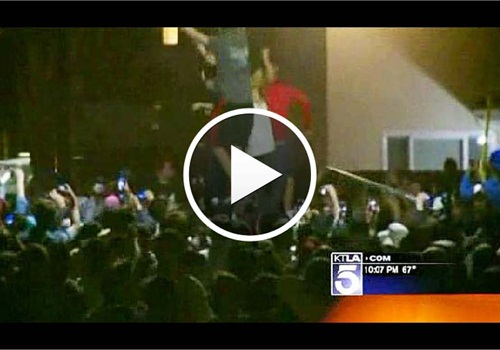 Six officers were injured Saturday night, one significantly, after a Spring Break street party near the University of California at Santa Barbara became a melee and then a riot.

Santa Barbara County Sheriff  Bill Brown told KTLA that the university police officer was struck in the head by a backpack containing large bottles of alcohol while responding to the spring-break party, dubbed "Deltopia," about 9:30 p.m. Saturday in Isla Vista.

“It knocked him down, split his forehead open to the point that he needed extensive suturing,” Brown said.

When an arrest was made, the crowd became unruly, officials told the Los Angeles Times. Several people threw rocks and bottles at officers and an unlawful assembly was declared, according to a statement from the Santa Barbara County Sheriff's Department. During the melee, street signs were ripped down, small fires were set and Sheriff's Department vehicles were damaged, authorities said.

Five deputies were injured, including one who was hit in the face with a brick, and dozens more people were sent to the hospital for related injuries, authorities said. Approximately 100 people were arrested.