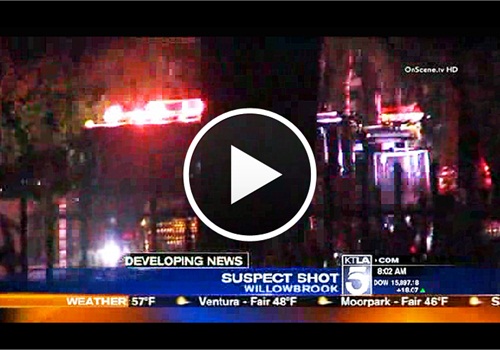 A man was shot by Los Angeles County sheriff's deputies in Willowbrook on Sunday after he allegedly opened fire while holding his 1-year-old son, authorities told the Los Angeles Times.

The incident unfolded about 10 p.m. when the 43-year-old man drove to his ex-girlfriend's home, confronted her boyfriend, and allegedly shot him in the face with a revolver.

After the shooting, the man allegedly drove away with his son, according to statement released by the Los Angeles County Sheriff's Department. Deputies attempted to pull the car over, but the man allegedly led them on a car chase, eventually driving back to his ex-girlfriend's house.

"The suspect exited his car, while holding his baby with one arm and a revolver in the other hand," the Sheriff's Department said.

Authorities said the alleged gunman attempted to enter the home through the side and front doors, but they were locked. At the same time, authorities said the man pointed the handgun at deputies and fired shots at them on two separate occasions. The deputies did not return fire.

At one point, the mother was able to take the child away from the man. When he again pointed his gun at deputies, they opened fire, striking him multiple times, authorities said.

The gunman and the ex-girlfriend’s boyfriend are expected to survive.