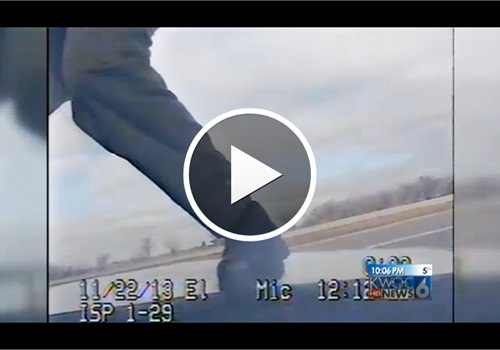 Illinois State Police have released video showing a state conservation officer shooting an Ohio man to death after the man pinned a ISP trooper between his van and another vehicle.

The incident occurred on Interstate 88 after Shane Cataline was stopped by Illinois State Trooper Luke Kuehl. Cataline, driving a van, had made a 911 call to state police District 7 headquarters. Kuehl was backed up by Conservation Officer Steve Francisko.

Kuehl’s stop was the second welfare check of Cataline in 30 minutes. Cataline refused repeated commands by the trooper to turn the van off.

Instead he drove off, flinging Kuehl who was holding on to the open driver side door of the van into the road.

Police say Cataline then drove right at Kuehl, pinning the trooper between the van and the trooper’s patrol car. Kuehl was unable to respond, as the van accelerated forward. So Francisko jumped up on the hood of the squad car and fired five times at Cataline killing him and stopping the attack.

The shooting was ruled justified and Kuehl has recovered from his injuries and is back at work, KWQC reports.