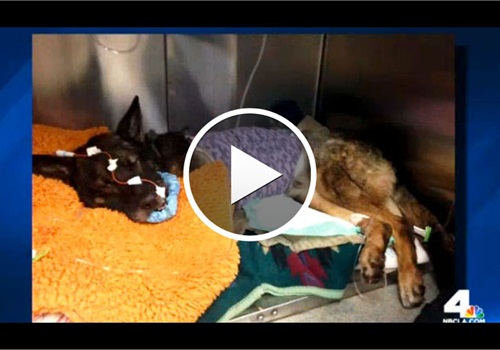 An Anaheim, Calif., police dog underwent surgery Thursday night and remained heavily sedated in "a lot of pain" after being struck by a bullet in the face during a confrontation with a gunman. Police later shot and killed the gunman.

The incident began when probation officers were conducting a search in the 1120 block of Mayfair Avenue about 2 p.m., according to the Anaheim Police Department.

The probationer and two other men ran into an alley when they saw police, officials said. One of the men fired shots at an officer who followed them into the alley, but the officer was not hit.

The gunmen ran away, and police called a SWAT team and K-9 unit for help. During a neighborhood search, a K-9 named Bruno found one of the men hiding in a trash bin, police told NBC Los Angeles.

The man then shot 7-year-old Bruno in the face, prompting officers to return fire, police said. The bullet shattered his lower jaw bone and re-entered the dog in his chest.

The gunman died at the scene. Police took one man into custody but were still searching for the third.

A Clayton County, GA, police officer was killed in a crash as he was heading to his off-duty job Monday.

As soon as police pulled up, a young female can be seen tackling another female to the ground with what appeared to be a knife in her hand. The girl can then be seen charging at another nearby female while raising the apparent knife in the air, at which point the officer fired multiple shots, fatally wounding the attacker.