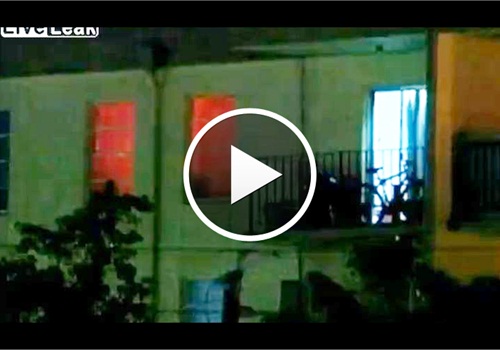 A South Florida man who killed six people in a shooting spree at his apartment complex had called 911 hours earlier to report he was being followed and threatened by people doing witchcraft on him.

During the 12-minute call, 42-year-old Pedro Vargas asked the dispatcher to run the license plate of a vehicle parked outside his building. Vargas' mother then told the dispatcher her son was acting strangely and "might think I'm his enemy."

At about 6:30 p.m. Friday, Vargas began his bizarre, deadly rampage. He began by stacking $10,000 in cash on a bed, pouring a flammable liquid on it, and setting a fire. He then fatally shot the husband and wife building managers, a family of three, and a man returning to the complex.

During an eight-hour standoff, Vargas fired at Hialeah Police officers as he ran along complex walkways. Officers chasing him returned fire, reports the Associated Press.

Vargas took two hostages and barricaded himself in a fifth-floor apartment. When negotiations broke down with police crisis negotiators, the Hialeah Police Department's SWAT team entered the unit, rescued the hostages, and killed Vargas.

The final moments of the standoff were partially captured by neighbors filming from a nearby balcony. Video shows officers crouched outside the building. Gunfire erupts inside the apartment. Orange muzzle flashes can be seen, and officers eventually emerge onto the balcony.

Vargas, a former graphic artist, had been harassing former co-workers with "abusive emails and text messages" after he was let go in October, reports the Associated Press.