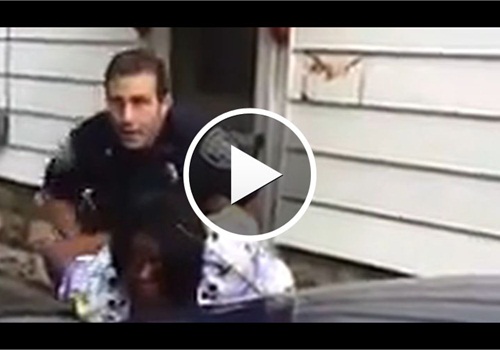 The Rochester (N.Y.) Police chief defended his officers, after a citizen's video showing an officer striking a woman who is resisting arrest and yelling that she is pregnant.

Chief James Sheppard said his officers used "tremendous restraint" Tuesday during the arrests of Romengeno Hardaway, 16, and his sister, Brenda Hardaway, 21. Chief Sheppard said the chaotic incident could have been avoided if the Hardaways had complied with officers, reports the Rochester City Newspaper.

At one point while officers attempt to arrest Brenda Hardaway, Officer Lucas Krull is seen striking her in the back of the head and taking her to the ground. Officers had responded to a fight, and Brenda Hardaway physically interfered with an arrest and pointed a can of pepper spray at officers, the chief told reporters.

"Our actions were dictated by her actions," Chief Sheppard said.

An additional 12 seconds of video from the incident not initially posted on YouTube shows Brenda Hardaway trying to strike the officer, reports YNN.

Local African-American clergy leaders say they want justice, and the chief should be fired.

"I would like that we meet with the mayor to go over as far as removing Chief Sheppard," said Edward Goolsby, NAACP. "If Chief Sheppard cannot control his officers, then we need to put somebody there who could."