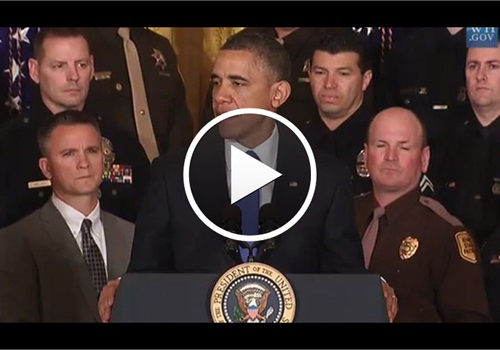 The officers, who received the National Association of Police Organizations (NAPO) Top Cops award Sunday, appeared in uniform in the East Room.

"We don't always get that opportunity to stand and applaud the men and women who keep us safe," Obama told the officers. "But they're out there, hundreds of thousands of you, patrolling our streets every single day. And we know that when we need you most, you'll be ready to dash into danger, to protect our lives even if it means putting your lives on the line."

Honored officers included Oak Creek (Wis.) Police Lt. Brian Murphy, who was shot 12 times after responding to the Sikh Temple shooting. Murphy attended the State of the Union address earlier in the year as a guest of First Lady Michelle Obama.

"He fought back until help arrived and ordered his fellow officers, who are here today, to protect the safety of the Americans worshiping inside—even though he was lying there bleeding from 12 bullet wounds," President Obama said. "When he was asked how he did it, he said, 'That's just the way we're made.'"

NAPO also honored seven other Oak Creek PD officers including Sam Lenda, who stopped the rampage with his patrol rifle.

Another honoree included Miami-Dade Police Detective John Saavedra, who was injured in a deadly shootout with drug traffickers at a marijuana grow house. Video of the incident was released on Thursday.

The group also included 12 LAPD officers who chased and arrested Ian Schlesinger after he allegedly carjacked a vehicle in September. Following a pursuit from North Hollywood to downtown Los Angeles, Schlesinger is reported to have exited his vehicle and fired AK-47 rounds at officers. He was wounded and taken into custody in a shootout with police, which included members of the Rampart Division's Special Problems Unit.

Each year, NAPO honors its Top Cops nominated by their colleagues for noteworthy service. For the full list of winners, click here.