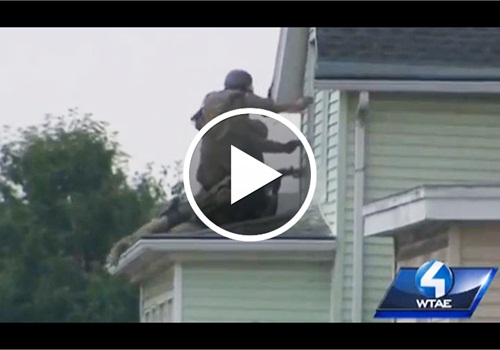 The Pennsylvania trooper who was wounded in a dynamic entry in Latrobe on Friday is expected to fully recover, the agency has announced.

Gunfire from Scott Murphy, 46, struck Trooper Brian King as he and other members of the Pennsylvania State Police Special Emergency Response Team (SERT) attempted to enter a second-floor window of a house on Lloyd Avenue.

Troopers attempted the entry before noon on Friday, after communications broke down with Murphy. After reaching the window, the troopers were met with a barrage of gunfire. Two rounds from Murphy struck King twice—one in the ballistic helmet and the second to the face shield of his gas mask. The officers returned fire, and Murphy was found dead later with multiple gunshot wounds.

The standoff began at about 7 p.m. Thursday, when state police surrounded the home. Police convinced two men to exit the house, but Murphy remained inside. Murphy was a suspect in an armed robbery at Precision Care Pharmacy of oxycodone pills.

Murphy's girlfriend, 25-year-old Julian Upholster, has been charged with robbery and firearms violations after police said she stole guns from her roommate and gave them to Murphy, reports the Post-Gazette.