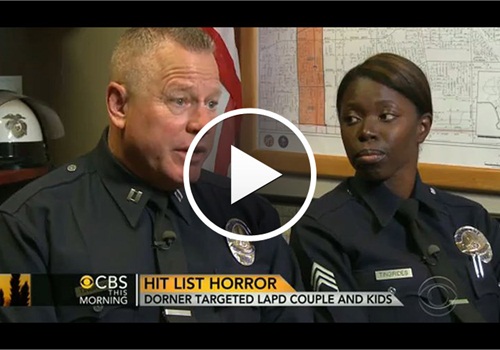 A Watts Blood gang offered to protect a Los Angeles Police captain who found himself at the top of Chris Dorner's hit list, reports CBS News.

The LAPD couple Capt. Phillip Tingirides and Sgt. Emada Tingirides, an African-American, were placed in protective custody during Dorner's rampage that ended Feb. 12 in a Big Bear cabin. Tingirides was one of the officers on the panel that recommended Dorner's firing in 2008.

The Bounty Hunter Bloods, a larger Watts gang that covers the Nickerson Gardens housing project, made the offer after the threat to the captain was made public.

Dorner apparently had stalked Tingirides, who has returned to the streets of South Los Angeles with his wife. Emada Tingirides said she only read part of Dorner's manifesto that named her husband. She dismissed Dorner's claim that the LAPD is a racist agency and said she was surprised by the community support.

"I was surprised, because normally we're not the recipients of, you know, of those phone calls and those good words," Emada told CBS' John Miller. "And we had community members from Watts calling and saying, 'We need you here, we can't let anything happen to you.'"