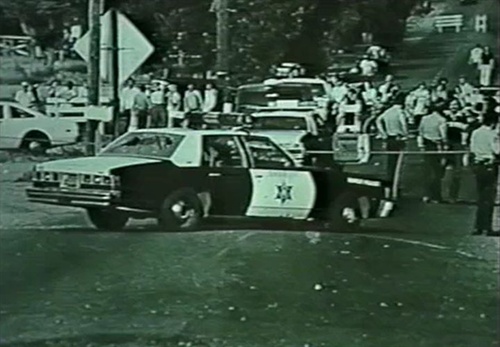 Much has been made of the odd team of Larry Eugene Phillips Jr. and Emil Matasareanu, who robbed Bank of America's North Hollywood branch in February of 1997.

The two self-styled survivalists and military weapons nuts met in a Venice, Calif., gym in 1989. They earned the nickname "The High Incident Bandits," because they were suspects in several armored car and bank robberies in Colorado and California. The firefight that resulted with LAPD would forever change the way cops train. It also secured a place for patrol rifles in future patrol cars.

These same lessons were well learned earlier by Inland Empire law enforcement in Riverside and San Bernardino counties on May 6, 1980. Five young men who saw themselves as survivalists and "gun nuts" — not quite militia, not quite white supremacists — attempted to rob a bank.

They would later be described simply as rednecks (although several were Latinos). This "redneck" gang carefully studied the Anarchist Cookbook and led responding officers on a 25-mile running gun battle from Norco to the Lytle Creek area of the San Bernardino Mountains. They damaged or destroyed 33 patrol cars, shot down a sheriff's helicopter, wounded eight officers and killed Riverside County Sheriff's Deputy James Evans.

This redneck gang of five had built numerous improvised explosive devices (IEDs) made from gun powder, PVC pipe, cans, safety fuse, bottles and scraps of metal for shrapnel. Some IEDs were designed to be thrown like hand grenades but others were made to be launched from a shotgun and were effective out to quite a range. Several of the shotgun-launched IEDs were fragmentary grenades and others were incendiary devices.

The gang had practiced and zeroed in their handguns, shotguns and AR-15, .223-caliber rifle in an unsupervised shooting area called Lytle Creek. Years later, a public shooting range would be built there.

This gang was made up of Beliasro Delgado, 17, and his brother Manuel Delgado. The oldest member was 30-year-old Christopher Gregory Harven of Mira Loma. The remaining members were Russell Harven, 27, of Anaheim and the brains of the gang George Wayne Smith, 28, of Cypress.

The incident began when the suspects carjacked a green van in the city of Brea, taking the driver hostage. They were dressed in military fatigue jackets and wearing masks. As a diversion, the gang set an IED under a gas main about a block away. The device used a candle to time the detonation to draw police away from the targeted bank. An observant Norco resident noticed the burning candle and reported it to the fire department. This prevented the device from going off.

Not waiting for the failed diversion, four of the gang members entered the Security Pacific Bank at Fourth Street and Hammer Avenue. George Smith had cased the bank earlier and had come up with the actual plan to rob the bank, but the plan was falling apart already.[PAGEBREAK]

Belisaro Delgado waited in the parking lot behind the wheel of the van. He was in radio contact with his fellow gang members who were now entering the Security Pacific Bank.

An observant employee from another bank across the street saw the four men entering the bank and called the police. Riverside County Deputy Glynn Bolasky heard the radio call only 500 to 800 yards away from the Security Pacific Bank, and turned his radio car into the bank parking lot.

As the four exited the bank, they opened up on Deputy Bolasky and his radio car, blasting out his windows and peppering his car with rounds. Deputy Bolasky instinctively threw his car into reverse, accelerating backwards onto the street. He exited the patrol car, took cover behind the vehicle, and began returning fire.

The four gang members jumped into the hijacked van with Belisaro as the get-away driver. The suspects continued to shoot at the deputy. A well-placed shotgun round fired by Bolasky struck Belisaro Delgado in the head and the van careened into a telephone pole guide wire. The four remaining robbers abandoned the van with the bank money and fired numerous rounds at Bolasky. Over 47 bullet holes struck his cruiser. Deputy Bolasky had sustained five hits — in the face, left shoulder, both forearms and left elbow.

Deputies Charles Hille and Andy Delgado (no relation to the Delgado brothers) had just entered the fight. Deputy Delgado exchanged gunfire with the robbers while Hille evacuated Bolasky and transported him to the hospital.

As other police units rolled in, the four heavily armed robbers commandeered a utility truck. A rolling gun fight and pursuit began with one suspect driving and the other three firing from the bed of the utility truck. The robbers began launching the homemade rifle grenades at the pursuing vehicles. Eight deputies were wounded and 33 law enforcement vehicles were damaged. The suspects also shot innocent civilians along the way.

There were many instances of uncommon valor performed by the heroic officers during the firefight and pursuit.

The 25-mile pursuit ended in Lytle Creek when the gang got far enough ahead of the pursuing vehicles and suddenly stopped and set up an ambush. Officer James Evans' vehicle was the first vehicle to enter the ambush kill zone. Evans was shot in the head and killed. The pursuing officers had been armed with only revolvers and shotguns, but San Bernardino Deputy D.J. McCarty brought an AR-15 to the gunfight. Shortly after he began firing, the four remaining gang members scattered into the brush and trees.

Through the night of May 9 and the day of May 10, law enforcement units crisscrossed the Lytle Creek wilderness. Some of the officers borrowed rifles from campers and target shooters they met along the way. SWAT units from Riverside, San Bernardino and the Los Angeles County Sheriff's Department participated in the hunt for the bad guys.

The chase came to an end in the early morning hours of May 11 when Christopher Gregory Harven, Russell Harven and Gregory Wayne Smith surrendered to searchers. Manuel Delgado kept his vow not to be taken alive and was killed in a fatal confrontation with the LASD Special Enforcement Bureau deputies.

Gangs are a serious problem negatively impacting American culture. And the rise of gang activity as evidenced by the rash of shootings we've seen in major metropolitan areas like Chicago and elsewhere is increasingly threatening the very safety and security of both law enforcement officers and the communities we serve, nationwide.

A question for the mayor: If it really is unacceptable, why do you continue to accept it?

A court granted the ACLU of Illinois and Black Lives Matter Chicago permission to intervene in the consent decree negotiations.

Mirror, Mirror on the Wall

As a former prison gang member, I'm ashamed to look in the mirror because my failures are staring back at me.

No One Should Die So Young

Leslie Zepeda died the day after Christmas. She had no time for a final hug, a final kiss, one last chance for her family to tell her how much they loved and cherished her.

As the show progresses, we see the challenges that El Paso Detective Sonya Cross (Diane Kruger) and Juárez Detective Marco Ruiz (Demian Bichir) face in working together across cultural divides as well as in an environment of extensive police and government corruption.

Why We Should Hire Returning Veterans

Like war, police work can be an ugly job. Like military service, it can be dangerous physically and psychologically. But who's better prepared to endure that crucible than our returning combat veterans?