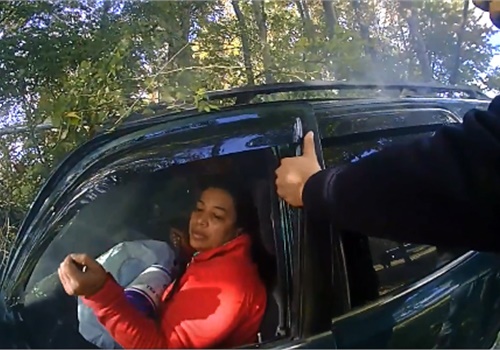 Body camera video shows an officer with the North Brunswick (NJ) Police Department cutting the seatbelt of a driver at a crash scene and then attempting to forcibly open the wrinkled car door to extract her and another female passenger.

The incident reportedly happened on Wednesday afternoon, according to MyCentralJersey.com.

The officer was reportedly on patrol when he spotted the crash—smoke coming from the vehicle beside the road.

As the officer turned around and approached the crash scene he noticed several other drivers also pulling over.

As the front of the vehicle began bursting into flames, the officer—identified as Anthony Torres—and at least one 'Good Samaritan' became increasingly desperate, deciding to pull the driver through the shattered window.

The passenger had already exited the vehicle that way.

Captain Brian Hoiberg said that there is no doubt lives were saved by Torres and the good Samaritans who pulled over to assist.

An officer with the London Metropolitan Police Department was gunned down inside a department station house in the Croydon neighborhood on Friday morning, the agency said in a statement.

A female deputy formerly with the Sacramento County Sheriff's Office has been sentenced to six months in jail after being found guilty of having an inappropriate sexual relationship with a teenage boy.

The Fountain (CO) Police Department has named its new K-9 "Moody" in honor of Marshal John Lindamood, who was shot and killed in 1921. At the time of his death, Lindamood was 45 years old.

Officers with the Buffalo (NY) Police Department will no longer be required to display their names on their uniforms.

Chief John Hayden said Tuesday he hopes that the recent removal of the residency requirement for his department will help generate a net increase of about 100 officers over the next year.

Two officers with the Louisville Metro Police Department were shot and wounded as what had been a mostly peaceful protest during daylight hours devolved into a violent riot after the sun set and a government-issued curfew loomed over the city.