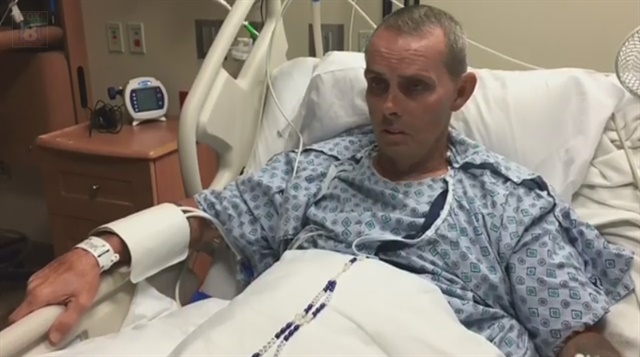 Sgt. David White of the Uniontown (OH) Police Department fights back tears and holds his wife's hand as he struggles to find the right words to express his gratitude to everyone who has helped him since he was shot.

"I can never say thank you enough," White told Fox 8 during an exclusive interview from his hospital bed Monday afternoon.

He said he decided to speak publicly because he wanted to make sure the community knows how grateful he is for all the support he has received.

"It has been incredible," White said. "I really want to thank the community and everyone for their support and prayers. Plus the staff at Summa (the hospital) has been amazing. They saved my life."

White was shot several times July 9 as he and other officers were responding to a domestic violence call.

"I felt each bullet, each hit," White said. He was shot four times. "I felt God was with me. I felt comfort."

He has had several surgeries and is still unable to eat. However, he says he is feeling better and stronger every day.