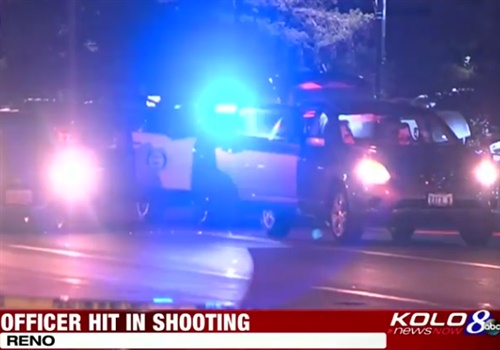 A Reno, NV, officer was wounded and a suspect was killed in a shooting after a traffic stop Thursday night, and police continue to look for a suspect on the run.

Police say the incident unfolded around 9:30 p.m. when officers pulled over a car on Kietzke Lane and shots were fired from the car. Two people then got out of the car, still shooting, and wounded an officer, who is recovering after surgery. The name of that officer has not been released, reports KOLO.

Police fired back, fatally shooting one person, whose name has not been released. The other, teenager Erick Bernal, ran off and is still on the loose. He is described only as Hispanic, and because he is a minor no photo has been made available.

Police say he goes by the name "Smokey" and is part of a gang that has been in the Reno area for 40 years. Police say he is involved in criminal activity, but there were no warrants out for his arrest. Officers had been watching him and his fellow gang members for at least a week.

Police believe Bernal is injured, possibly with a gunshot wound, and armed. Police aren't saying whether the injuries are from the confrontation Thursday night, or from a previous incident.