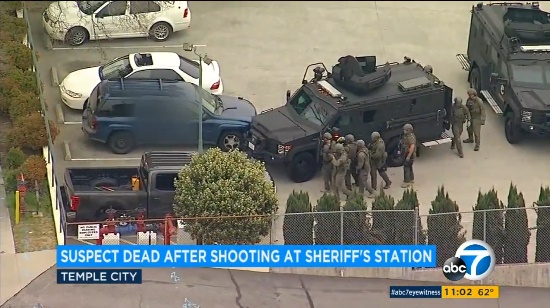 A man is dead after he opened fire on deputies at the Los Angeles Sheriff's Station in Temple City, CA, early Monday morning, according to authorities.

The Los Angeles County Sheriff's Department said the suspect, only identified as a man in his 40s, had entered the sheriff's station to register as a sex offender before he later opened fire in the parking lot at about 7:15 a.m. Authorities said there was an exchange of gunfire between the suspect and deputies, reports KABC.

Officers were seen surrounding a dark SUV at the station's parking lot and a flashbang was deployed.

Authorities later confirmed the suspect inside the SUV was dead. According to officials, the suspect appeared to have died from a self-inflicted gunshot wound.

Officials said no deputies were injured during the gunfire.

"This is another assault on deputies and we see these all too frequently now," Sheriff Jim McDonnell said. "Certainly a cause for concern for everyone in our communities."