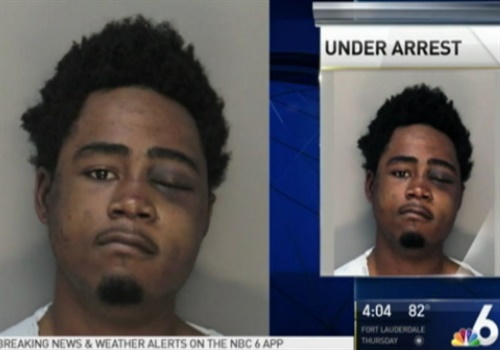 A 19-year-old man was arrested early Wednesday after police say he opened fire in an "ambush-style attack" on two undercover Miami-Dade detectives who were investigating gang activity, police said.

Detective Terence White, 47, and Detective Charles Woods, 37, were in an unmarked police vehicle on the city's north side investigating gang activity when, according to officials, at least four men "ambushed" the car just before 10 p.m. Monday and opened fire, reports NBC Miami.

Police say Thompson fired multiple shots as he walked about the car, "aiming to kill" the detectives, according to an arrest report. At least one officer returned fire, Miami-Dade Police Maj. Hector Llevat said.

"They were ambushed in their vehicle, unprovoked," Llevat said.

White was shot in the foot and was being treated at Jackson Memorial Hospital. Woods was treated for a gunshot wound in the arm at the same Miami hospital and released. The officers' unmarked car was riddled with dozens of bullet holes.