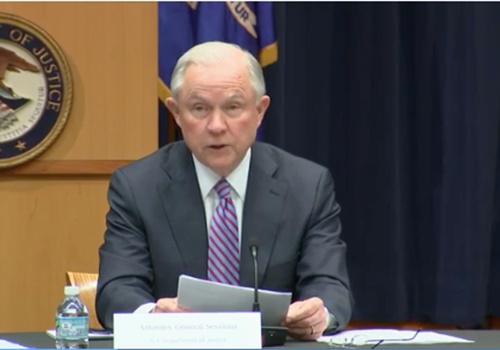 The attorney general said the gang, which began in Los Angeles in 1980s and is largely headquartered in the prisons of El Salvador, numbers more than 10,000 in the United States. Sessions, citing data compiled by the National Gang Intelligence Center, said membership has been rising "significantly'' in recent years, broadening their extortion, human trafficking and illegal drug distribution enterprises.

"Harboring criminal aliens only helps violent gangs like MS-13,'' Sessions told a meeting of the Organized Crime Council, a consortium of agencies across the government.  "Sanctuary cities are aiding these cartels to refill their ranks and putting innocent life — including the lives of countless law-abiding immigrants — in danger.''

The incident started when officers responded to a report of shots fired shortly after 3:30 a.m. When officers arrived on the scene they reportedly found a man who was dead. During a search for the suspect, they were directed to his apartment.