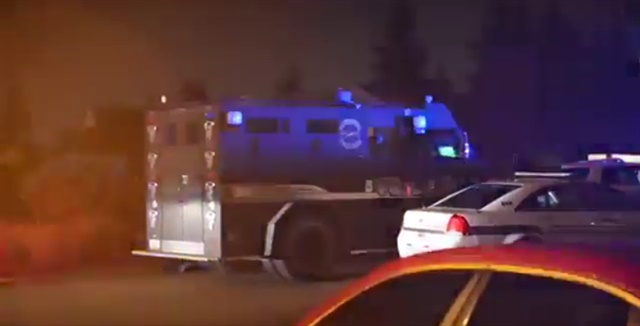 A Tacoma, WA, police officer was fatally shot Wednesday while responding to a domestic violence call on the city’s East Side, sparking an 12-hour-long standoff with the suspect who was killed by police.

The shooting happened after two officers were called just before 4 p.m. to respond to a verbal argument. They knocked on the front door.

Details on what led up to the shooting were not immediately available. Police did not know if officers returned fire, where the officer was when he was shot or how he was removed from the scene while the gunman continued to fire.

Before his body was moved, more than 80 uniformed law enforcement officers waited at attention for more than an hour in the cold outside the hospital.

Many saluted their fallen comrade as his body was placed into an ambulance at the front of a procession of dozens of vehicles that escorted the officer’s body roughly three miles to the Pierce County Medical Examiner’s Office.

The officer’s body was draped in a flag and loaded into the ambulance at 10:40 p.m. A column of 10 Tacoma police motorcycles and 50 cars from an array of area police departments followed it away.