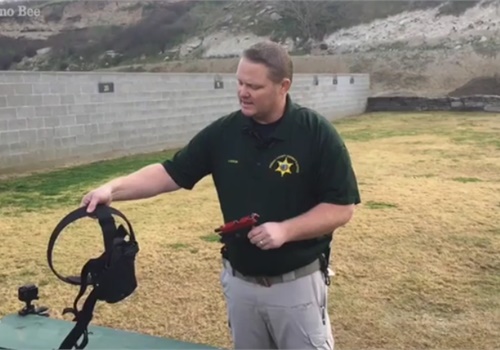 The Fresno County (CA) Sheriff's Office Wednesday demonstrated how a deputy was wounded by his service pistol in an accidental discharge and emphasized that additional training was being implemented to prevent another such incident, reports the Fresno Bee.

The deputy is a member of the MAGEC anti-gang unit who was wounded on Nov. 4 in southeast Fresno while was he was putting on his gun belt in preparation for an operation. The sheriff's office invited members of the media to the training facility near Herndon Avenue and Highway 99 for the demonstration.

According to training officer Jeremy Harlow, the deputy, whose name has not been released, was putting on the thigh holster when the belt's fastening prong became trapped in the holster and set off the trigger on the Smith & Wesson M&P while the deputy was trying to free it. A bullet from the semi-automatic weapon struck the deputy. He has not yet returned to work.

Harlow said the sheriff's office has since issued a training bulletin to prevent similar accidents. He said the sheriff's office did not plan to change to a different type of holster or service weapon because of the incident. Harlow noted that it was possible for the belt buckle prong to fit inside the holster because the handgun was equipped with a light, which required the holster to be larger. Deputies need the light on the weapon because they often work in low-light situations, he said.