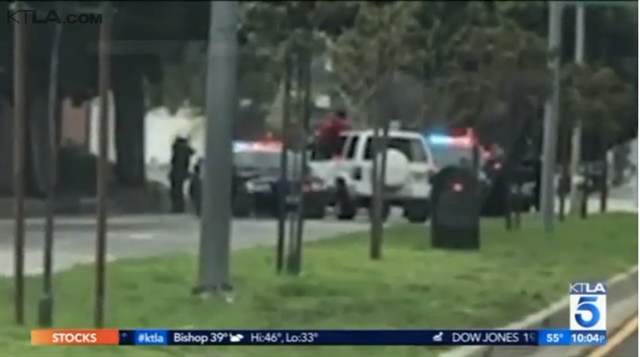 A man wanted for threatening people with a Hatchet was shot dead by police after a chase ended in the Westchester neighborhood of Los Angeles Wednesday afternoon, according to an El Segundo police captain. No officers were hurt.

The incident began about 12:25 p.m., when police received multiple calls reporting a man approaching people on the street and threatening them with an ax or machete, Capt. Brian Evanski of the El Segundo Police Department told KTLA TV.

Officers went to the scene, a residential area in the town of El Segundo, and found the man they suspected of the threats. A pursuit began, Evanski said.

The chase ended about 3 miles away, on the north side of Los Angeles International Airport.

After the driver's vehicle was stopped and he got out of the vehicle. Officers opened fire, and the man was declared dead on scene, the captain said.

Video obtained by celebrity news website TMZ showed the man getting out of the driver's side window and appearing to try to get onto the hood of the SUV before being struck by gunfire.

Evanski said he didn't know if a weapon had been recovered, but aerial video from Sky showed an ax or hatchet lay on the roadway near where a body lay covered with a sheet.