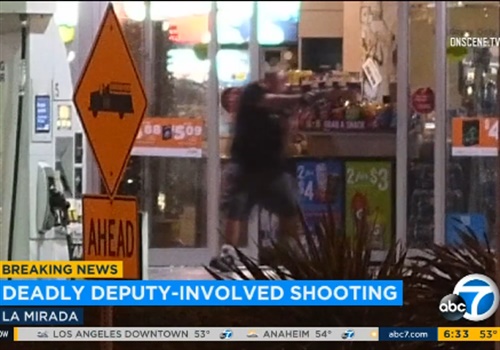 The shootout came after a standoff that began at about 9:15 p.m. Monday when deputies responded to a call of a robbery at an AM/PM at Beach Boulevard and Hillsborough Drive, according to the Los Angeles County Sheriff's Department.

No customers or employees were inside the store when the suspect barricaded himself inside, a sheriff's department spokesperson said. He had arrived on a bicycle and allegedly attempted to rob the business, reports KABC.

The agency's Special Enforcement Bureau was summoned to the scene, along with a crisis negotiation team. At some point, the man fired a single round at deputies while he was inside the AM/PM, authorities said.

The standoff continued until about 12:25 a.m. when the suspect walked out of the store and fired another round. Deputies, who had approached the front of the building alongside an armored vehicle, returned fire.

No deputies were injured in the incident.