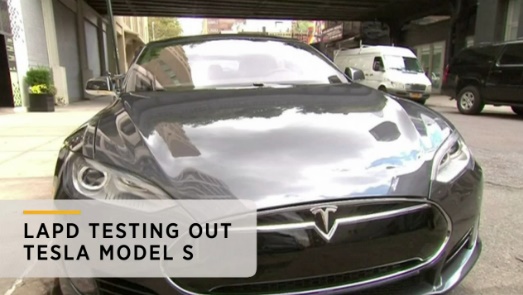 Electric car company Tesla's Model S sedan is being tested by the Los Angeles Police Department, the police force in the nation's second-biggest city. Testing has been underway for nearly a year, and the agency has two Model S P85D loaner cars, reports CNBC.

"Tesla definitely stepped up and gave us the Model S to do some evaluation with them," said LAPD Police Administrator Vartan Yegiyan. Tesla is working with the agency "to assess the vehicle's performance in our environment and to learn what are the drawbacks and positives of this type of vehicle in our fleet operation. Not only on the regular transportation side, but also the future in the high-pursuit-rated vehicle arena."

LAPD doesn't rule out the Tesla as a future option, at least in the longer term, despite the current lofty price.

"Is it practical now? No," Yegiyan said, but he added that over "the next three to five years ... not only will the industry push toward electrification, but prices will drop on vehicles. More models will be coming out, and the electricity and electrical grid will become more robust, and more charging stations will be available. While that's occurring we'll be in the space learning and contributing to the process."

The Tesla Model S P85D carries a manufacturer's suggested retail price of around $100,000, although some models are cheaper. Ford's Explorer-based Police Interceptor SUV, the nation's top-selling police model, has an MSRP of nearly $30,000; that can rise to the range of $45,000 to $50,000 when outfitted with LAPD's police equipment.

In addition, LAPD is testing the all-electric BMW i3, which has a MSRP of about $43,000. The department already has purchased more than 20 electric scooters and about a half dozen electric motorcycles used by patrol officers.