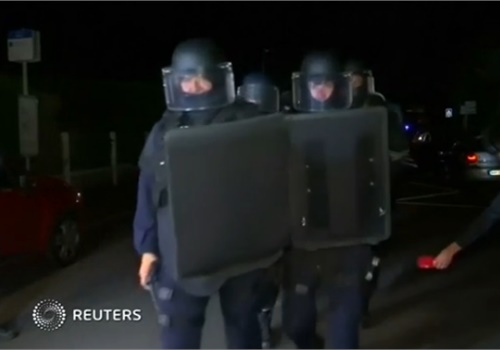 France's president called Tuesday for increased security in a nation already on high alert after an apparent Islamic State-inspired attacker fatally stabbed a couple with police ties and recorded a message before he was killed by police, reports the Washington Post.

Authorities had taken three additional suspects into custody and said that the assailant had a list of names for possible further attacks, including journalists and public officials. The names have not been made public.

President François Hollande described the killings of the couple — police Capt. Jean-Baptiste Salvaing, 42, and his partner, Jessica Schneider, 36, identified as an administrative secretary at a police department outside Paris — as "undeniably a terrorist attack" and said that "France is confronted by an extremely high terrorist threat."

The couple's 3-year-old son was present during the attack, but was apparently unharmed. The suspect, identified as Larossi Abballa, 25, apparently posted a video message to a Facebook account before he was killed in a police raid on the couple's home in Magnanville, about 30 miles northwest of Paris, officials said.