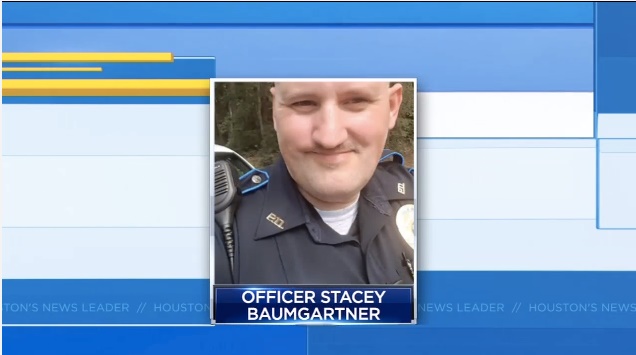 A Patton Village, TX, officer and an 11-year-old boy were killed Sunday night in a car crash during a chase in the Conroe area. Several other people were injured.

According to the Texas Department of Public Safety, Patton Village Sgt. Stacey Baumgartner was sent to the Valero Corner store at SH 242 and US 59. It was reported that a man was urinating on the sidewalk and exposing himself to customers. As Sgt. Baumgartner arrived, police say Garrett William Nee, 29, attempted to run down the officer and a chase began.

They were headed west on Highway 242 from US 59. At the intersection of FM 1485, Nee reportedly ran a light and kept going. Sgt. Baumgartner followed but was T-boned by a white 1998 Chevy Suburban.

"The force from the crash forced the officer to the immediate right of the intersection and he hit a traffic light pole," said DPS Trooper Richard Standifer. "The SUV, after the crash occurred, due to the severe damage and the force, it was flipped. It came to rest and was upside down on the 1485 side, just off the improved shoulder."

Sgt. Baumgartner was transported to Memorial Hermann Hospital in The Woodlands with CPR in progress, but he was declared dead upon arrival. The 11-year-old inside the SUV was killed and multiple other people were transported to the hospital in serious condition, KTRK TV reports.

The message: “ACAB! The Barrel is Rotten” was posted days ago on a sign in front of the Our Place Inn, and later shared on its Facebook page.

Sgt. Charles Warren has spent nearly 150 days in the hospital, during which time he was placed on a ventilator and coded several times, according to the sheriff.

Nashville Officer Shot After Being Set Up by 911 Caller

Metro police spokesperson, Don Aaron said officers had responded to the home after a man called 911 to report his brother had shot his mother and gunshots were being fired inside the residence.

n a statement, the bureau said the person had been involved in a “security incident” outside the CIA before he “emerged from his vehicle with a weapon.”

Hopewell Township, NJ, has fired a police officer who described Black Lives Matter protesters as “terrorists” and will suspend and demote another for replying to a comment on the Facebook post.

Officers learned the victims had been carjacked at gunpoint by two men wearing shirts with the word “POLICE” written on the front, Burbank police said.

The Board of Estimate and Apportionment voted 2-1 in favor of the cuts, with Mayor Tishaura Jones and Comptroller Darlene Green supporting the move and Board of Aldermen President Lewis Reed opposed.

“We are reminding residents about Larry Krasner’s soft-on-crime policies that have made Philadelphia unsafe and dangerous,” FOP President John McNesby said in a press release. “Krasner’s failed social experiment is costing lives all across this city.”

The department said K-9 Jango is believed to have been struck by gunfire when a man who was reportedly driving a stolen vehicle and had fled police fired at the K-9 and his human partner as they approached him inside a building.