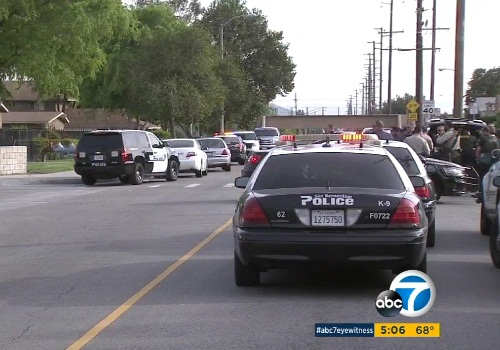 San Bernardino, CA, police are looking for a suspect who shot at, but did not hit, a civilian employee of their agency.

The community services officer was filling out paperwork on a stolen vehicle as he waited for a tow truck around 2:15 p.m. when someone began shooting at him, police said.

He is a civilian who had no weapon to return fire. The officer was not injured, but his marked car was left riddled with bullet holes and smashed glass, KABC TV reports.

A Clayton County, GA, police officer was killed in a crash as he was heading to his off-duty job Monday.

As soon as police pulled up, a young female can be seen tackling another female to the ground with what appeared to be a knife in her hand. The girl can then be seen charging at another nearby female while raising the apparent knife in the air, at which point the officer fired multiple shots, fatally wounding the attacker.