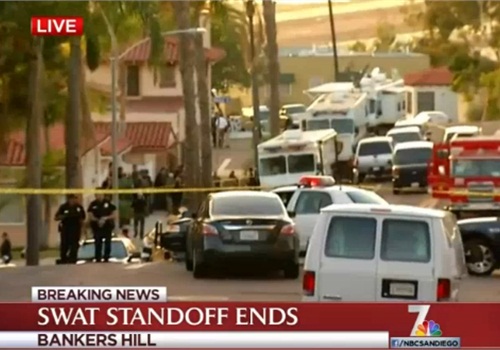 San Diego PD officers were called to 2445 Brant Street in the Bankers Hill area just after 9 a.m. PST for a domestic violence call. A woman told SDPD she was not home when the suspect, identified by police as 33-year-old Titus Colbert, called her to say he was inside the unit.

When officers arrived, they immediately came under fire, according to police.

The threat to the community was so great, San Diego police shut down traffic on the ground and ordered residents to shelter in place. At the same time, The Federal Aviation Administration issued a ground stop for arrivals into San Diego International Airport, located less than two miles away.

Colbert was holed up in a one-bedroom apartment on the southeast side of the building, Wahl said. A five-hour standoff ensued, and police deployed gas several times. No one was injured.

Colbert finally surrendered around 2:35 p.m. PST. According to court records, Colbert is a documented gang member with a criminal record.