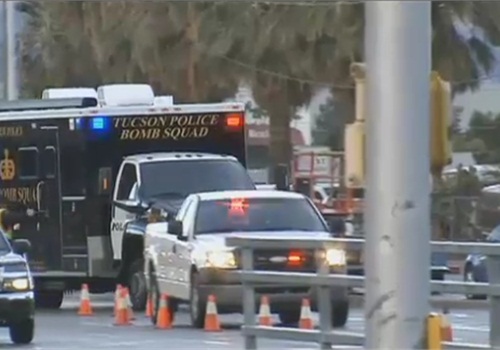 Several agencies are on the scene after a man claiming to be armed with weapons and explosives showed up at the Tucson Police Department substation on Miracle Mile Wednesday morning, authorities said.

Sgt. Pete Dugan, spokesman for the TPD, told Tucson News Now that negotiators are on the scene now and are talking with the suspect.

Dugan said the man, who is in his mid 30s, drove an RV to the substation and tried to contact officers around 7:30 a.m. The front door was locked so the man used the call box.

Dugan said the man sounded incoherent so officers walked outside to meet him. The suspect then hopped back into his RV, called 911 and told the operator he had weapons and propane and was going to blow up his RV.

KVOA TV reports that the man has been seen waving a hammer, holding a gas can, and ranting incoherently at a police robot.