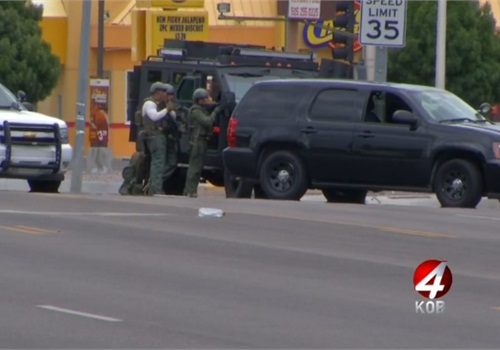 Albuquerque police took two carjacking suspects into custody after a chase and SWAT standoff that lasted more than eight hours at a tire shop near Louisiana Boulevard and Zuni Road SE Wednesday.

Martin Duran, 36, surrendered to police just after 6 p.m. APD said he was arrested in June for stealing a car and he had an armed robbery warrant.

Police told KOB TV they tried to call Duran more than 400 times before SWAT went into the business to arrest him. He had been hiding in a loft in the tire shop.

According to APD, the female suspect, 28-year-old Alisha Lopez, peacefully surrendered before 12:30 p.m. They said she had just been arrested on July 13 on an armed robbery warrant.

The carjacking occurred Tuesday morning in the 1600 block of Arizona NE. Police spokesman Tanner Tixier said Duran threatened a woman at gunpoint and took off in her vehicle.