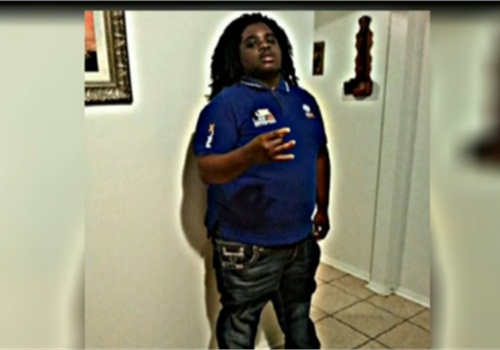 Indianapolis police are investigating the death of a shoplifting suspect who died in custody after complaining of breathing problems.

Terrell Day, 18, died in the back of a police ambulance on Saturday after twice complaining of breathing issues during his arrest, according to the Indianapolis Metropolitan Police Department.

Officers responding to a report of an armed man in a Burlington Coat Factory store on Saturday afternoon learned that a male shoplifting suspected had pointed a gun at a security officer then fled, police said in a statement to NBC News.

The suspect — Day — was spotted lying in a "grassy area" behind a gas station about 500 yards away and "immediately surrendered" without incident, police added, saying that a handgun was recovered at the same time.

Police said that when the man told officers he was having trouble breathing, an ambulance was called. The responding EMTs assessed Day and determined he could be taken on to processing "via jail wagon," according to the statement.

Day again complained of breathing difficulties when the jail wagon arrived and a second ambulance was called but his "condition deteriorated," police said.

The Chicago Tribune reported Monday that the Marion County coroner's office conducted an autopsy on Day and determined his cause of death to be acute myocardial infarction, or a heart attack.

A New Jersey officer found and rescued a suicidal woman who survived an overnight leap from a bridge and suffered serious injuries.

An NYPD officer was seriously injured when he was pinned between two cars during a traffic stop after a hit-and-run driver crashed into the vehicles.