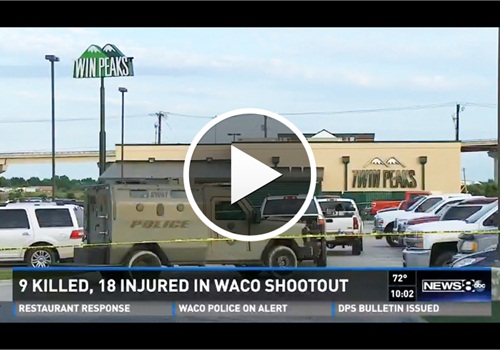 Nine people were killed and 18 others were injured in a confrontation involving "criminal" motorcycle gangs at a Twin Peaks restaurant on the south side of Waco, Texas, early Sunday afternoon.

Police say 192 people have been booked and processed into the McLennan County Jail. They will be charged with engaging in organized crime.

Waco police spokesman Sgt. W. Patrick Swanton told WFAA TV some of the dead and wounded may have been struck by gunfire from law enforcement. SWAT and patrol officers responded to the melee.

Officers arrived at the restaurant shortly after noon after a conflict was reported between at least two biker gangs. The altercation apparently began with an argument inside a restroom at the restaurant. It quickly escalated and moved into the parking lot.

No police officers or innocent civilians were injured. One officer suffered from heat exhaustion and was hospitalized.

The wounded were suffering from gunshot and stab wounds, Swanton said.

At least five biker gangs were involved in the incident, some of which were fighting as allies. They had reportedly met at the restaurant to discuss issues of turf and recruitment. Dozens of weapons, including pistols, knives, clubs, brass knuckles, and chains were recovered at the scene.

"In 34 years of law enforcement, this is the worst crime scene, the most violent crime scene that I have ever been involved in," Swanton added.

He was also very critical of the management at Twin Peaks, saying they had failed to cooperate with law enforcement agencies trying to deal with biker gangs. He said Monday that the restaurant had been warned for about two months about what could happen.

Because the Waco Police were concerned about the growing biker gang problems at the restaurant, officers were positioned nearby in case of trouble.

Swanton said Sunday that authorities were concerned gang members were moving to other parts of the city to continue the confrontation elsewhere.

Parts of downtown Waco have been on lockdown since Sunday, and officers have been stopping bikers and questioning them around the Waco area. “We have been getting reports throughout the day that bikers from out of state are headed this way,” added Swanton. “We would encourage them not to, because we have plenty of space in our county jail to put them there.”

The men killed were members of the two main rival groups, the Bandidos and the Cossacks, the Dallas Morning News reports.