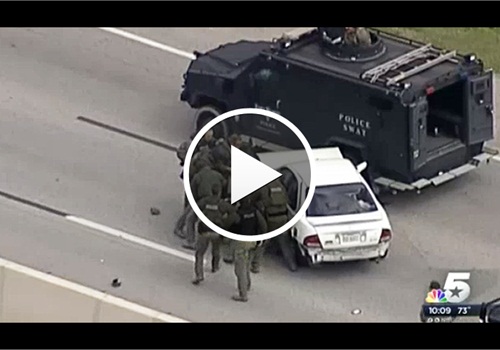 A two-hour police chase ended in a crash with Fort Worth SWAT in Arlington, Texas, on Wednesday, reports KXAS-TV.

The man, who police later identified as 42-year-old Joe Gonzales, was driving a white, four-door Nissan on Interstate 30 between west Fort Worth and Arlington.

The chase ended with a crash at about 4 p.m. when a Fort Worth SWAT BearCat slammed into the side of the car, causing it to strike a center concrete barrier on eastbound I-30 near Ballpark Way in Arlington.

Fort Worth police and SWAT members surrounded the vehicle with guns drawn, pulled Gonzales out through a back seat window, and handcuffed him.

Fort Worth police said Gonzalez faces charges of evading arrest and felony possession of a controlled substance. They said they found a considerable amount of methamphetamine inside the car.