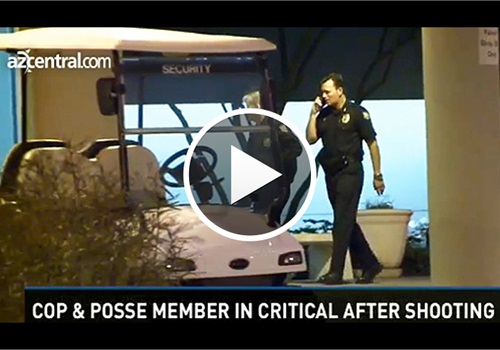 A Phoenix police officer and a Maricopa County Sheriff’s Posse member were both shot by a robbery suspect on New Year's Eve, the Arizona Republic reports.

David Lee Murray Jr., 36, and Roger Allen Sharp, 26, collided with a pickup truck while fleeing from a robbery about a mile away, police say.   Officers say the pair were involved in an armed robbery at about 2 p.m. in a parking lot near 2500 E. 44th Street.

A Phoenix police officer pursued the suspects after the robbery and tried to make an arrest after the vehicle collision, according to police.

The officer, gun drawn, gave commands to Sharp, who was driving the car, police said.   "Sharp and the officer got into a struggle," said Tommy Thompson, a Phoenix Police Department spokesman. "Seeing the struggle, the driver of the truck attempted to assist the officer. Ultimately, Sharp was able to take control of the officer's gun, and he used it to shoot both the officer and the man who came to his aid."

Police did not release the names of the 34-year-old police officer, who has served seven years on the force, or the 63-year-old driver who police later learned is a member of the Maricopa County Sheriff’s Posse.   Both underwent surgery Tuesday, and as of Wednesday evening, both were listed in critical but stable condition, authorities said.