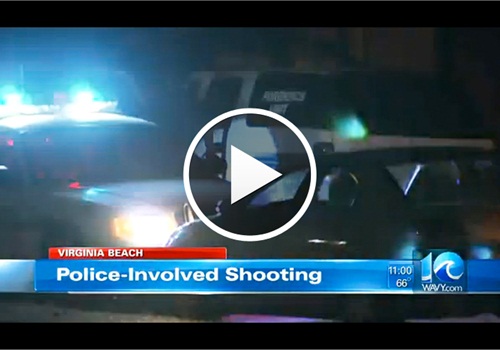 A domestic incident call to the Virginia Beach Police led to a barricaded suspect and an officer-involved shooting Wednesday night.

Adam Bernstein with the Virginia Beach Police Department told WAVY TV that officers responded to the 500 block of Bay Cove Quay around 6:15 p.m. when a woman called and said her husband had locked himself in a bathroom and threatened to harm himself.

The woman and her five-year-old child exited the home and were secured by police. The man, identified as 30-year-old Shane Whitworth, barricaded himself inside the home. Police set up a perimeter around the home and established communication with Whitworth, who exited the house into the backyard, armed with a handgun. Whitworth discharged the weapon once and hid under a trampoline. Eventually, Bernstein said Whitworth used a ladder to climb over the yard's fence into the 500 block of Chownings Drive.

Once over the fence, officers encountered Whitworth and shot him. Paramedics immediately began performing CPR, but were unsuccessful. Whitworth was pronounced dead at the scene.

K9 Kozmo was released to help track the suspects. Officers eventually located the suspects but could not find Kozmo. The police dog was found dead after an extensive search.

The standoff followed an hourslong chase of a white SUV that police identified in a string of drive-by shootings that left two men dead and a third wounded in a span of 30 minutes.

GA K-9 to Retire After Recovering from Gunshot Wound

Jerry Lee was rushed to the Blue Pearl Animal Hospital in Sandy Springs shortly after the shooting, the GBI previously said. He was released from the hospital Tuesday afternoon, wearing a blue cast from paw to shoulder as he pranced to meet his handler.

Seventeen officers, one lieutenant, and two sergeants resigned from the team. According to Shaun Willoughby, president of the Albuquerque Police Officers’ Association, the officers feel over-scrutinized, so they decided to take a stand with each other.

While crossing the river, the 6-month-old baby was thrown out of the raft by the smugglers, Texas DPS said on Facebook.

The officer "acted in a manner entirely inconsistent with his K-9 training and had violated Police Department policy. As a result, he was recommended for termination.”

The officers took her into protective custody and drove her to the police station, where she told detectives that over the past year she had been moved around Southern California and even taken to Nevada and Colorado, forced to work as a prostitute.

Correctional Officer and Nurse Attacked and Killed at Iowa Prison

The attack took place Tuesday morning in the prison’s infirmary. The inmate was restrained by additional security staff, while other employees of the facility began “attempting life-saving first aid on the injured until paramedics arrived,” the Iowa Department of Corrections said in a statement.

“When you look at different sections of New York City, whether it’s in Chinatown, whether it’s here in Lower Manhattan, whether it’s in Flushing or parts of Brooklyn, you’re going to see uniformed, as well as some people that may surprise you,” Commissioner Dermot Shea said.