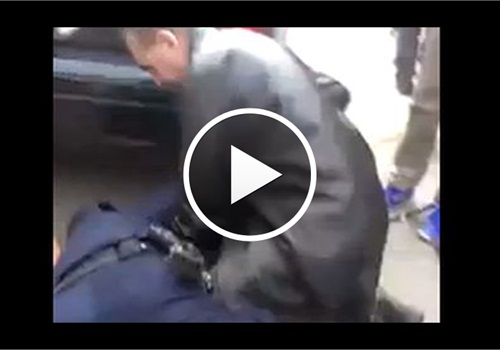 The incident went viral on YouTube, when an onlooker posted a cell-phone clip of the incident.

Officer Robert Mason responded to a report that two groups of teens were fighting on March 10 near the Horseshoe Casino. Several of teens resisted Officer Mason, and one teen pulled the officer onto the ground.

As the officer scuffled with 18-year-old Trevon Woodson, Joseph Mosijowsky jumped in to help Officer Mason. Mosijowsky had taken a smoking break from the casino, reports WKYC.

One of the teens is seen grabbing Mosijowsky by the neck and taking away his walking cane. A city bus driver is also seen trying to keep the teens away from the officer.

Woodson, 19-year-old Victoria Soper, and a 15-year-old girl were arrested.