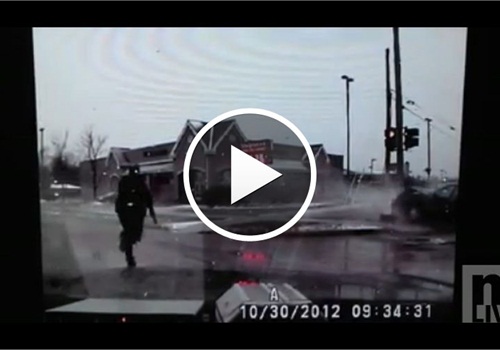 Two bank robbery suspects were taken into custody after ramming an unmarked police car, slamming into a utility pole, and attempting to flee on foot.

Dash-cam video from a Flushing (Mich.) Police Department cruiser captured the two minutes of mayhem following the robbery of a Citizens Bank in Mt. Morris Township on Oct. 30.

The video shows a Flushing PD officer responding to the bank and seeing the suspects ram a detective's vehicle, hop a curb and flee west on Pierson Road. The suspects then sideswipe a Genesee County Sheriff's cruiser before striking a utility pole.

The suspects were caught after a foot pursuit, reports MLive.com.