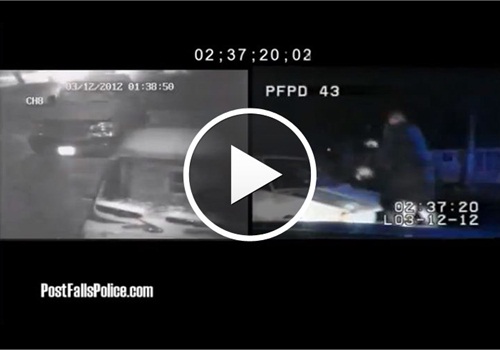 The footage, which was released Friday, shows the violent end of the officers' pursuit of Justin Earl Nicholas Todd, 33. The felon with a history of eluding police had been named the North Idaho Violent Crimes Task Force's "fugitive of the week."

The officer-involved shooting of Todd came at the end of a 20-minute chase in Hayden by Idaho State Police Cpl. Michael Thomas Keys and Post Falls police Officers Aaron Ogle and Bradley Johnson.

Todd twice recovered from the officers' attempts to use a PIT maneuver to stop the felon. The video shows officers exit their vehicles. Keys then accelerated, striking Trooper Keys with his vehicle. At that point, the three officers opened fire, killing Todd.

Todd, who died at the scene, was shot 10 times. Johnson fired 16 shots, Ogle fired one and Keys three, reports the Spokesman-Review.