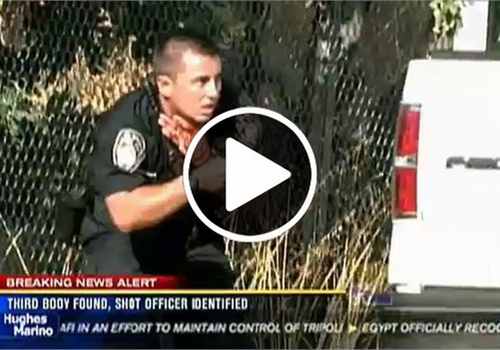 A man angered by his divorce allegedly killed his mother-in-law and daughter, set fire to the mother-in-law's home, and fired at officers who initially responded to the scene.

El Cajon (Calif.) Police Officer Jared Slocum, 28, was struck in the neck by gunfire from the home as he crouched behind a vehicle. Officer Slocum and his partner responded to the home on Prince Street after 5 p.m. Sunday.

Dramatic footage captured by a news cameraman shows the officer holding a bleeding neck after being struck. The officer runs from the cover of the white truck and collapses near a chain-link fence. A second officer then runs toward his partner and drags him to safety.

The incident began after a neighbor called in a report of a man who was seen outside the residence with a gun.

The suspect, Kevin Collier, was getting divorced, and had shown up at his mother-in-law's house. The home was reportedly on fire when officers arrived, according to neighbors quoted in a KFMB CBS report. Collier's 14-month-old daughter was found dead in a truck.