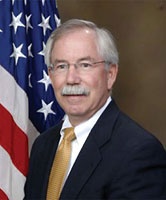 Facing increasing pressure to resign, the interim head of the Bureau of Alcohol, Tobacco, Firearms, and Explosives (ATF) instead added more fuel to a congressional gun-trafficking probe by implicating the FBI and Drug Enforcement Administration on Wednesday.

Kenneth Melson told congressional investigators that several Mexican drug cartel operators targeted by his agency were paid informants for the FBI and DEA.

Melson said the FBI and DEA kept the ATF "in the dark" about their relationships with the cartel informants.

The incident started when officers responded to a report of shots fired shortly after 3:30 a.m. When officers arrived on the scene they reportedly found a man who was dead. During a search for the suspect, they were directed to his apartment.