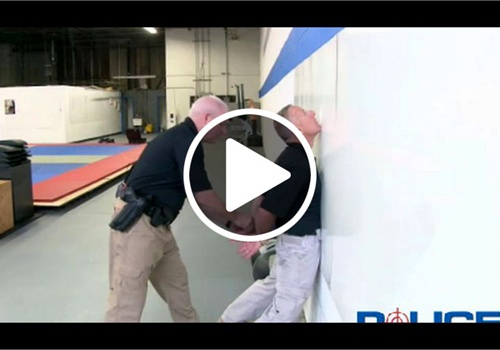 VIDEO: Handcuffing on a Wall

Handcuffing a suspect on a wall is one of those police control tactics that's fallen out of favor, mostly because law enforcement agencies and trainers have realized just how dangerous it can be for the officer.

If not done properly, a hands-on-the-wall, pat-down search can give the suspect an opportunity for a close-quarters ambush attack. Pittsburgh Police Officer Janine Triolo attempted to use this tactic on a robbery suspect on the evening of Feb. 17, 2010.

After locating Ryan Davis, who had held a man at gunpoint at a nearby high school, Officer Triolo instructed him to put his palms on a wall. The officer patted him down and snapped a cuff on his right wrist. She then noticed him drawing his arms in toward his waist. Davis spun around, punched her in the face, and knocked her down.

He straddled the officer and began punching her in the face. Luckily for Officer Triolo, Davis' 9mm Ruger malfunctioned after he pointed it at her. She drew her own sidearm and fired, ending the threat.

Many law enforcement agencies have scrapped on-the-wall handcuffing from police training. However, there's a way to do it safely. As with most police tactics, your ability to win comes down to your effective execution of a proven method.

We'd like to share two such methods with you, courtesy of Lt. Kevin Dillon, a respected police trainer. Lt. Dillon and POLICE teamed up in a video demo to show you two ways to handcuff a suspect that gives you the tactical advantage and puts the suspect at a tactical disadvantage. This video, which you can view by clicking on the above photo, will help keep you sharp, so you can effectively respond to a suspect's counter move.

In the video, Lt. Dillon demonstrates two effective handcuffing strategies — one in space, and a second on the wall.

First, Lt. Dillon shows you the optimal position you'll want your suspect to take on the wall, as well as the difference between a cover position and handcuffing position.

If you choose to use a wall, Lt. Dillon shows you an effective way to handcuff the suspect. He explains why its crucial that the suspect's shoulders should be behind his hips.

Enjoy the video. When you're done, head back to this page for links to additional videos from Lt. Dillon below.