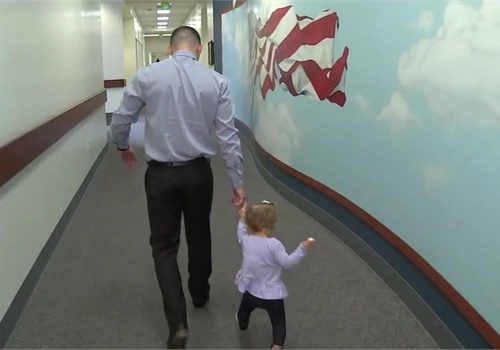 An Ontario, CA, police officer who was among those wounded during the Las Vegas shooting massacre last year is back on the job, reports KABC.

"It's been a frustrating and emotional journey," Michael Gracia said. "I miss work. I miss talking with people, so being back here is a blessing."

Gracia was with his fiancée Summer Clyburn on Oct. 1, 2017 in Las Vegas, at the Route 91 Harvest festival, when a gunman opened fire into the crowd. Fifty-eight people were killed and hundreds were left wounded, either by bullets and shrapnel, or trampled as concertgoers tried to escape.

"I survived a horrible incident," Gracia said. "So it's a blessing to be here with my daughter, and my fiancée, and be here at work serving again."

Gracia was struck by a bullet on the left side of his head and suffered brain damage. His fiancée said he had to learn how to eat, drink, and talk all over again.

For the time being, Gracia is taking reports behind the front counter. He said interacting with the public allows him to work on his speech. But he plans to return to patrol.

Sheriff Ed Gonzalez said the deputy was alert and conscious on the way to an area hospital. He's expected to survive after being shot multiple times, including in the hands, back and cheek.

The study found that scoop and run hospital transports had survival rates comparable to those transported by EMS professionals highlighting how crucial police have become to patient care.

The association has listed three measures it supports and will grade lawmakers on this session, including state money to help small departments provide bullet-resistant vests, $1,220 a year in supplemental pay for officers at accredited departments.

Majority of Mayors Do Not Want to Reallocate Police Funding

Eighty percent of the mayors who responded to the Menino Survey of Mayors say they believe their police budgets last year were "about right." Most mayors said they did not support reallocating many, or some of their police department's resources and responsibilities.