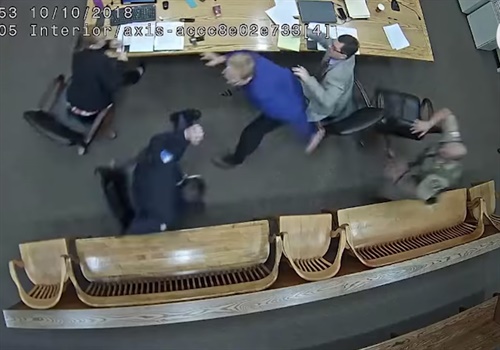 An Oregon man—identified as 27-year-old Patrick Lemmon—abruptly got up from his seat and attempted to grab the gun of an officer sitting just feet to his left. The incident was captured on video made public on YouTube by The Oregonian.

Lemmon was seated in a Lincoln County (OR) courtroom without any sort of restraints, because a judge had denied deputies' request.

Lemmon was on trial on allegations that he pointed a realistic-looking fake gun at two guests at a beachfront condo in Newport, threatened to kill them and then robbed them of cash and valuables, according to a probable cause affidavit, according to OregonLive.com.

The proposal would ban cities and counties from cutting spending on police departments by more than 5% in a year, unless they experience revenue loss.

Chief Rich Ferguson said the man had two semi-automatic rifles. When officers arrived on scene, he retreated into his home and began shooting. Officers then returned fire.

Fayetteville police said the car left the roadway and crashed into a tree, bursting into flames. An off-duty officer called 911.

Half of Survey's Very Liberal Respondents Believe 1,000 or More Unarmed Black Men Killed by Police in 2019