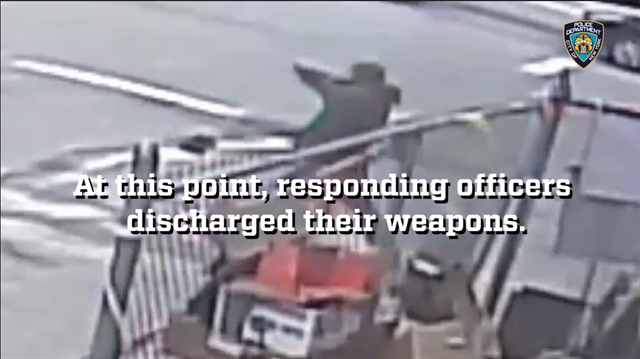 Saheed Vassell, 34, was shot by police after they received multiple reports of a man pointing what appeared to be a gun at people in the Crown Heights neighborhood around 4 p.m Wednesday, CBS News reports.

"There is a guy in a brown jacket walking around pointing -- I don't know (to someone else) what is he pointing in people's faces? They're saying it's a gun, it's silver," reported one caller.

Video surveillance appears to show Vassell doing what the callers describe: walking up to people on the sidewalk and pointing a metal object that looks like a gun but turned out to be a pipe at people's heads.

Near the end of the video, Vassell can be seen approaching an intersection and pointing the object in what looks like a two-handed shooting stance. The video freezes and text on the screen says, "At this point, responding officers discharged their weapons."

A deputy with the Waukesha County (WI) Sheriff's Department pulled over and issued a warning to the driver of the famous Oscar Mayer "Wienermobile" for reportedly violating that state's "move over law."

A woman has filed a lawsuit against the Denver Police Department one year after her home was destroyed by fire reportedly started by a SWAT team attempting to arrest her 35-year-old son, Joseph Quintana.

Officers with the Williamsburg (VA) Police Department have taken to being accompanied by dogs from area animal shelters in a "K-9 for a day" program aimed at finding those animals adoptive homes.