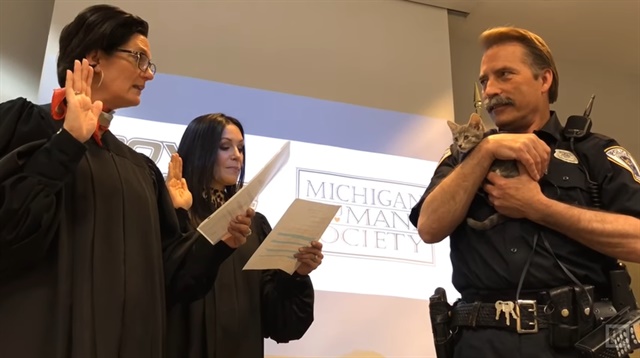 Pawfficer Donut has been sworn in as the Troy (MI) Police Department's Police cat. Judges Kirsten Nielsen Hartig and Maureen McGinnis asked Donut to raise her right paw and officially swore her in, badge and all, at the Troy Police Department with other officers and even Chief Gary Mayer looking on.

This all began in March when the Troy Police Department put out a challenge on Twitter saying it would get a police cat if it received 10,000 followers by April. It reached its goal weeks early, reports Michigan Live.

Pawfficer Donut will be used to help raise awareness for pet adoptions and rescues, also interacting with people in the community and on social media. She will live with a fellow Troy police officer who already has two adult cats at home. Pawfficer Donut will also spend some of her time at the police station.

Arizona Motor Officer Dies in Crash During Demonstration at School

Officer Jason Judd—a 21-year veteran of the Peoria Police Department—was seriously injured in the crash on the campus of a local high school where the agency is hosting a "Youth Citizen Police Academy Camp" for area teens.

An officer with the Tulsa (OK) Police Department who was severely wounded in a shooting during a traffic stop late last month is reportedly showing signs of improved heath.

The San Luis Obispo Police Department (SLOPD) is preparing an after action report to identify "lessons learned" and "what worked well" during recent protests in which the agency used crowd control tactics to quell a disturbance.

8 Louisiana Officers Indicted on Charges of Excessive Use of Force

Eight officers with the Shreveport (LA) Police Department are now accused of using excessive force against two men a prosecutor said had "raised their hands ... in an apparent attempt to surrender without resistance" following a police pursuit.

Councilman Herb Wesson said he looks forward to working on the project with members of Black Lives Matter Los Angeles.

Faced with a grim budget outlook and deluged by demands for reductions in police spending, the council voted 12 to 2 to take the Los Angeles Police Department down to 9,757 officers by next summer — a level of staffing not seen in the city since 2008.

The city council said in a statement Tuesday that the city's 2021 budget, totaling more than $88 billion, "reduces police spending and shrinks NYPD's footprint."

On Monday morning some protesters and a Fox News reporter got into a shouting match, which was broken up by black-clad, gun-toting men who appeared to be officers. One’s vest read, “Public Safety Officer.” The other read: “Iconic Global Officer.”

Police Funerals During the Pandemic