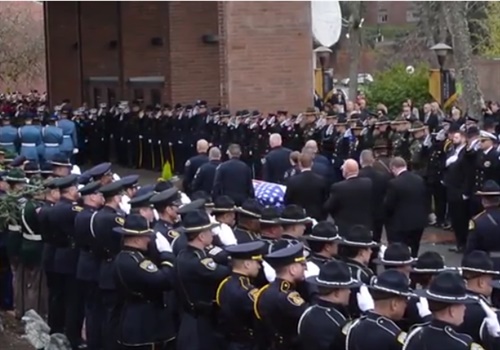 On Wednesday, more than 3,000 people packed into Olson Auditorium at Pacific Lutheran University to honor 34-year-old Pierce County Deputy Daniel McCartney, who was shot and killed Jan. 8 after responding to a home invasion robbery near Frederickson, WA.

McCartney read to children at the library, participated in Shop with a Cop, brought his wife a cup of coffee after every shift, and pushed fellow members at Crossfit Yelm to lift harder.

No matter how many roles he held, McCartney most cherished being a father. He tucked his three sons into bed every night. He read to them in the morning before leaving for work.

It was after responding to a 911 call of the home invasion robbery near Frederickson that McCartney was fatally shot by one of two masked men running away.

He was able to fire off five shots at the robbers before radioing dispatchers that he'd been hit.

"He lost his life striving to protect the lives of others," Sheriff Paul Pastor said. "He was true to the calling that he chose.