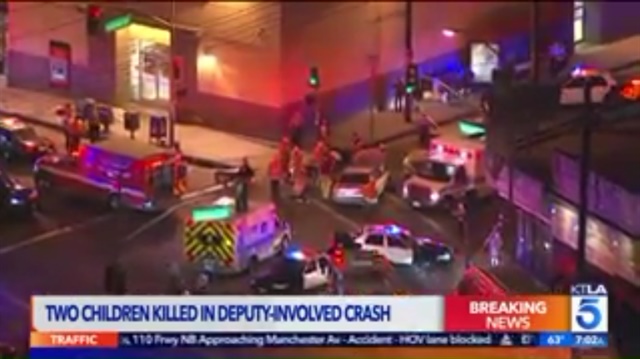 Two children were killed and their mother was critically injured in a crash involving an on-duty Los Angeles County Sheriff's SUV Thursday evening.

The crash was called in about 7:25 p.m. after the SUV and two other vehicles collided in an intersection on the border of East L.A. and Boyle Heights.

The two deputies were responding to an emergency call of a gunshot victim when the SUV was involved in the crash, Los Angeles Police Department Capt. Alfonso Lopez said.

The SUV collided with another vehicle and was sent off the roadway where it struck three pedestrians, later determined to be a mother and her two boys, the Los Angeles Police Department stated in a news release Friday. The boys were 7 and 9 years old.

Both deputies were hospitalized with minor injuries, KTLA TV reports.