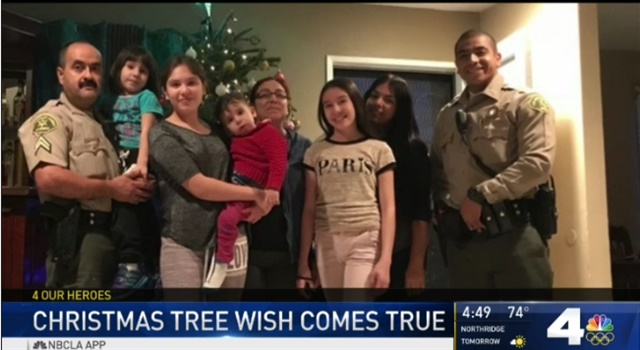 An 11-year-old Lynwood, CA, girl wrote a letter asking only for a Christmas tree for her family. She waited outside her home for four days at the beginning of December, hoping for someone who could help. Her wish was eventually answered by Los Angeles County Sheriff's deputies, reports KNBC.

While on patrol, deputies were flagged down by a little girl.

"She started asking us about a program that the department has where they help a needy family during the holiday," Deputy Pedro Valencia said.

Andrea Rodriguez said her father is the only one working and they didn't have a lot of money. So she wrote a letter to police asking for a Christmas tree for her family.

"The fact that she said they have never had a Christmas tree kind of humbled us a little bit," Valencia said.

The deputies picked up a seven-foot Noble fir and stuffed it in a patrol car. They also put the ornaments and lights in the trunk, and asked other deputies to help them deliver the surprise.