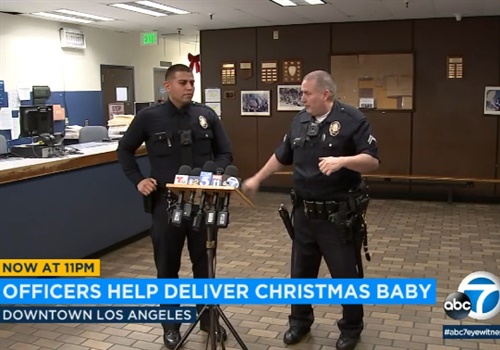 Officers from LAPD's Central Area were called to a Main Street building Monday afternoon for what initially came in as a woman screaming. When they arrived at the fifth-floor apartment, they found a woman who was about to give birth, reports KABC.

Officer Clinton Popham, a 19-year veteran of the force, and his rookie partner, Officer Francisco Muro, jumped into action, with the assistance of four other officers at the scene.

With the right coaching, they were able to help the 25-year-old woman, Angel Johnson, through the birth.

"I told her you gotta push, you gotta push now," Popham said. "If you don't, something's going to happen to the baby. She did. She pushed real hard. The baby came straight out."

Popham is a father of four so he's witnessed births before, but he's never been such a direct participant.

As for Muro, who's been on the force only six months, it was quite the experience.

"I definitely want to be a dad, but it's a great day to be an L.A. officer," Muro said.