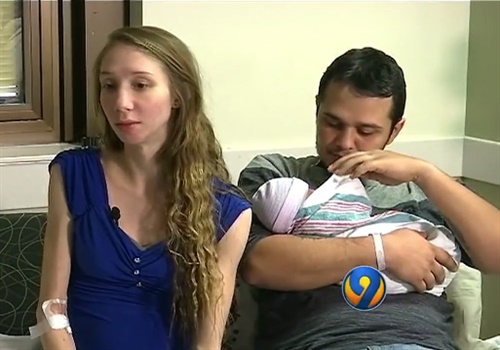 A South Carolina man watched his baby girl's birth while he was in handcuffs, reports WSOC-TV.

WCIV-TV reports Carl Alewine's fiancee's water broke early on New Year's morning and he was racing down Interstate 26 near Charleston to get her to the hospital.

The car was traveling at more than 90 miles per hour when several law enforcement officers started chasing Alewine and then eventually forced him to pull over.

They had Alewine in handcuffs when his little girl, Anastasia, came out with one push.

"I'm sitting there, watching her born on the hood of the car, fireworks going off in the background, because it's 1 in the morning on New Year's and then they let me out of handcuffs and all the cops started clapping and congratulating us," Alewine recalled.

The baby was born healthy, even though the mother went through a high-risk pregnancy.