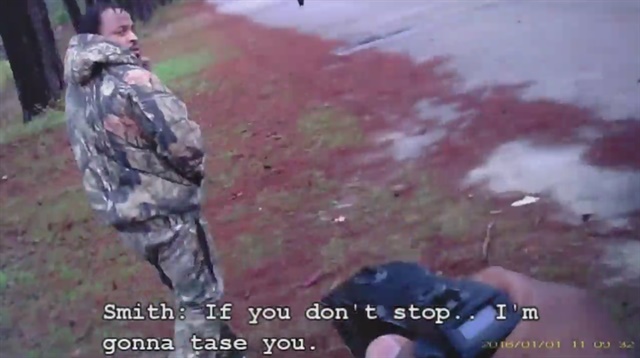 Video of the 2016 shooting of an Estill, SC, police officer was captured on a body-worn camera and released Thursday, a day after the conviction and sentencing of the shooter, who faces 35 years in prison for attempted murder and gun-related charges.

Officer Quincy Smith was called to investigate a suspicious man trying to snatch groceries from a convenience store in the small town of about 2,000 people.

Smith, wearing glasses outfitted with a video camera, spoke to a woman in the store. She pointed out Malcolm Antwan Orr, 29, as the suspect. Smith pursued Orr in his patrol car and got out to confront him.

Orr walked with his left hand holding a cellphone to his ear. His right hand was concealed in his jacket. Smith commanded him to take it out.

“If you don’t stop, I’m going to Tase you!” Smith commanded.

Orr looked back, drew a 9mm pistol, and fired multiple shots, sending Smith tumbling to the ground. Orr continues to fire rounds at Smith as he went to the ground, eight shots in total, the Washington Post reports.

Smith retreated to his patrol car and notified dispatch he had been shot and needed help.

Bullets broke two bones in Smith's arm, severed a vein in his neck, and passed through his upper torso, CBS News reports.

Shot four times and believing he was mortally wounded Smith told the dispatcher, "Tell my family that I love them." Fortunately, he survived the shooting.

"If but not for the grace of God and some very good doctors, this would not only have been a murder case, but a death penalty case," Solicitor Duffie Stone said in a statement.

A jury deliberated for less than 45 minutes before handing up a guilty verdict, the statement said.